French Musketeer of The Guard

Founded in France in 1622, The Musketeers of The Guard were akin to The Royal Household Cavalry Guard used by many European Monarchs (for self-protection). Normally made up of Nobility (and their relations), they were of the utmost loyal and trusted within The King or Queens “circle”. Highly trained as both Riflemen and Cavalry, The Musketeers of The Guard wore a Tabard which bore The King's Colors (Blue). They were the only Unit in The Military at the time allowed to to wear such. A White Cross was also designed into the Tabard (which showed their loyalty to God and their Catholic Faith). No Reformers or Protestants could be a Musketeer.

Under King Louis XIV, additional Musketeer Regiments were founded and used in various French military enterprises throughout Europe (mostly as Cavalry). Often seen as “Elitists”, Musketeers were nonetheless respected by both Nobility and Commoner alike. They were most known for their honor and fairness – regardless of “Class”. Considered “Sword Masters” they carried The French Rapier (a Spanish Model), that was between 44 and 48-inches in length. Often, a Musketeer also carried a personal Dagger (or smaller Arming Sword) as well. Although paid, many Musketeers relied on their personal “wealth”. Disbanded in 1776 die to budgetary expenses with The French Monarchy, they were reformed twice (in 1789 and again in 1814). Both times they were still tasked with the protection of The King and his Household. They were finally abolished in 1816. They were later “”immortalized” by French Writer Alexander Dumas in both Novels “The Three Musketeers” and “The Man in The Iron Mask” 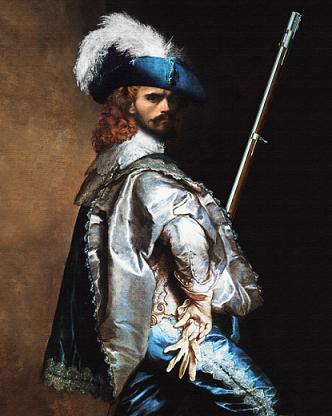