Built by The French (in what is now present day Pittsburgh, Pennsylvania) – in 1754, Fort Dusquesne was a Vauban-style fortification. Constructed to guard and protect the approaches of 3 major rivers (The Ohio, Allegheny and Monongahela), the Fort was originally a Trading Post in the early 1740s. Trade was with local Native American Tribes in the Region. Part of a Fortification Line, this defensive plan stretched up to Lake Erie, Pennsylvania (including 5 other similar Forts). The French Territory was eventually “contested “ by the British Governor of Virginia (who sent a young British Militia Officer – George Washington, to deliver terms).

Refused, Washington was able to make detailed plans of Dusquesne's defenses and garrison. In 1755, with hostilities renewed between France and England), a military expedition was sent to attack the Fort. It was a failure. Several other attacks (planned by British General Edward Braddock), were attempted – also without success. The French retained control of Fort Dusquesne during The French and Indian Wars.

In 1758, The French abandoned and destroyed the Fort. The ruins were occupied by The English – who rebuilt a smaller fortification, naming it Fort Pitt. Both Forts used a Wet/Dry Moat Defense system (accounted at 12 feet deep). The defensive perimeter walls (made of stone), were 6 to 12 feet thick. Fort Dusquesne was designed to be “slightly recessed” into the surrounding land (to provide an even better defensive/offensive position). The Fort could hold a garrison of up to 300 soldiers. With the growth of the nearby City of Pittsburgh (and better fortifications being being father down river), Dusquesne was eventually dismantled and filled in for land use. Now part of Point State Park (Downtown Pittsburgh), an area had been preserved and marked (to show the exact location of this important early Colonial Fort). 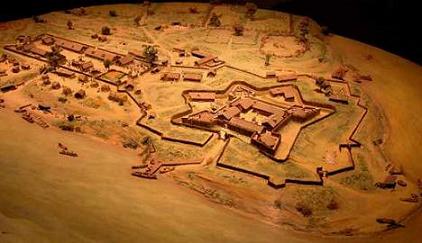