One of the last Martello Tower Forts built in The English Empire, Fort Denison is located in Port Jackson, Sidney Harbor, Australia. Constructed on Pinchgut Island (a jutting piece of land extending into the Port Harbor), construction was began in 1841 (and finished in 1856). The need to protect Port Jackson was first pressed in 1839. Two American Warships “flanked” Pinchgut Island (and anchored there in assumed threat). Second, in the 1850s, fears of a Russian Naval Fleet attacking Port Jackson (during The Crimean War) was a concern. Over 8,000 tones of local sandstone was ferried to the Island. Cut and placed by The Royal Engineer Corps, the Fort has 12 to 18 foot thick walls. Rising some 50 feet into the air, Fort Denison held a “garrison” of 25 men. The Fort originally featured 18 artillery pieces of various calibers. This placement was inclusive of a 360-degree rotational platform on the top of the Martello Tower. However, it was soon learned that for the most part, larger caliber pieces could not be effectively used (to to lack of hindsight with regards to the space needed). By 1906, all but 3 gun were removed (the 3 guns being used for ceremonial purposes). Fort Denison was accidentally “hit” by The US Navy in World War II. A US Navy Destroyer was attempting to sink a Japanese Midget Submarine trying to attack the harbor. An errant shot struck and damaged the Fort. Now a Museum, Fort Denison can be visited by The Public. 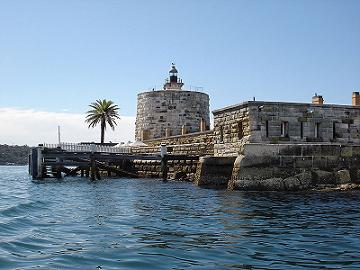