Based on the Ancient Greek "Flute", The Roman Flautas was a unique form of early Woodwind musical instrument. Noted for being among the first to use a cut, and vibrating piece of thin wood positioned in the mouthpiece  (later known as a Reed), The Flautas was unique in that it was actually two Flutes either joined or fixed permanently - or tied together with leather tongs. Key number and placement ranged from 6 to 9 (multiplied by two). Note Holes produced different notes due to airflow and finger placement. In the case of the earlier Flautas, these were connected at the mouthpiece, and angled outward (in a "V"'shape). Later, versions were simply two different pitch Flautas, were tied together. It was necessary to procure two such Flautas of different pitch, to create the effect of two different sounding instruments  (played by one). Both versions ranged from 2 to even 3-feet long and made of varnished wood.

In the earlier mouthpiece connected version, the Player would blow air into the instrument. The airflow would travel through both devices. It took a good set of lungs to maintain a constant airflow. Later twin Flautas, operated the same way, but we're more harder to play, due to having to maintain an airflow into to separate wooden tubes. The sound was unique in that very few people could play The Flautas. As a result a trained Player commanded more for his performances. These were naturally afforded by the more wealthier classes of Roman Citizens. Flautas were also heard in various, Public Spectacles (such as The Games). Flautas were seen at their zenith, during The Imperial Era. 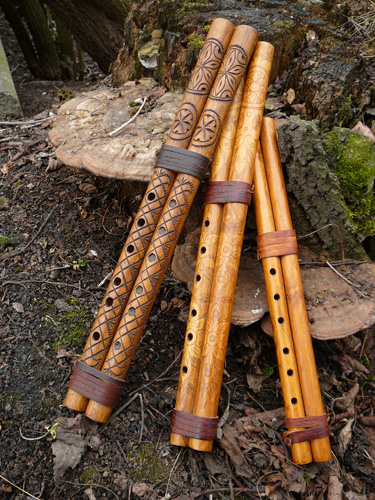