Flags of The White Star Line

The well known Colors of The British Shipping Company – known as The White Star Line, are best remembered for having flown over the ill-fated RMS “Titanic”. The Company was founded in England in 1845, to capitalize on the Merchant/Commerce trade, which was flourishing in The Atlantic. The White Star Line ran twin “sub-ventures” (the famed “Black Ball and “Eagle” Lines). Later, when massive spikes in immigration  caused many of the Poor to seek out “a better life” in America, The White Star Line became a major  component in such relocations. These “Second and Third” Class Passengers were the real “bread and butter” income for The Line. The wealthier Classes, paid exorbitant sums to travel between Europe and America (but the Lesser Class were far more consistent).

As with most Ships Warranted to bear Royal Mail, the primary colors of their Flag was Red. The basic design used was the “Double Swallow-Tail” Pennant. These measured roughly 10 to 15-feet in length. As a “Company” Flag, it was flown on the far Rearward Mast. The Pennant had a 5-pointed White Star, off-centered and nearest The Hoist. As a British Vessel, White Star Ships also flagged The British Royal Blue Ensign, flown off the Stern (rear end of Ship). In order to be seen at distances, The Blue Ensign was roughly 20 X 25 feet. The Blue Ensign had a Dark Blue Field in entirety.  On the upper left Canton, was the Red and White Crosses of The British Empire (or Union Jack).

White Star Flags flew until The Company was merged with it’s rival – The Cunard Line, in 1934. Because The White Star was older and more established, a merging of Logos was created. This new Brand still retained The White Star emblem. Although Cunard would merge with the modern “Carnival” Cruise Lines, the term “White Star Service” is used to describe a superior Service, harkening back to the opulent Era of The “Golden Age of Ocean Liners”. 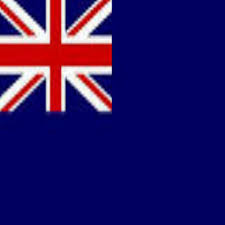