The 25th Corps. of The American Civil War Union Army, was a Unit originally Commanded by General US Grant at The Siege of Vicksburg, Mississippi. It would later be Commanded by General William Tecumseh Sherman on his “March To The Sea” (Georgia Campaign). The Corps. Headquarters Flag was composed of all 4 Divisions  (roughly 4 Infantry Divisions making a Corp.) The Flag was Quartered in 4 basic Colors. The Upper Left was Red (1st Division(, with the Upper Right being White (2nd Division). Additionally, the Lower Left Quarter was Yellow (4th Division), with the final Lower Right being Blue (3rd Division). Centered, was a White image of a Infantry Cartridge Box. The phrase “40 Rounds” was placed there. This was in relation to the amount of ammunition each Soldier was required to carry. 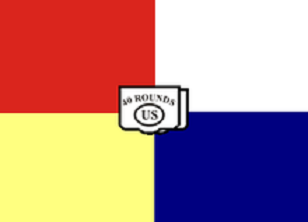