Flag of The Sheffield Regiment of Horse

The Sheffield Regiment of Horse, commanded by Colonel Thomas Sheffield – served in all three periods of The English Civil War (from 1645 until 1660). Consisting of several hundred Officers and Men, The Regiment was raised in near Oxford. They fought in many of the major Cavalry engagements of The War, and were even deployed (under Oliver Cromwell), to Ireland and Scotland. The Regiment would remain posted for the short lived Commonwealth until they self-disbanded at the start of England's Restoration. Their Regimental Colors were a Blue Field, encircled by a Gold and Black Border. Centered, was the image of King Charles, ''beheaded'' by a hand (assuming it to be that of a Parliamentarian). The Banner (to the Left of Field) bore the wording in Latin of ''Let The Good of The People Be Supreme Law''. 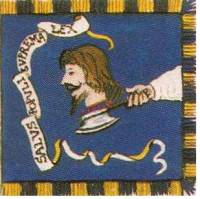