The Artillery Battalion of San Patiricio (St. Patrick) was formed by The Mexican Army in 1846. They were comprised of US Army deserters of Irish descent. These men, content to serve their “adoptive Country” of Mexico, were persecuted at every turn due to their Catholic Faith (which was NOT popular in America at the time). As many as 175 ex-Infantry and Artillerymen deserted and joined The Mexican Army in The mid-1840s. As Catholics, Mexico was glad to have well trained Artillerymen. Fighting against their old comrades during The Mexican War, all San Patricios captured were treated as traitors and eventually hung (despite formal protestations by The Mexican Government that they were THEIR soldiers). Their flag reflected their proud Irish heritage. A Green Field in it's entirety, The Irish Harp was Centered on the Colors. The emblazoned phrase “Erin Go Braugh” (and Gaelic War Cry), was placed below. Finally, the image and Blazoning was surmounted by Golden 4-leaved Clovers. 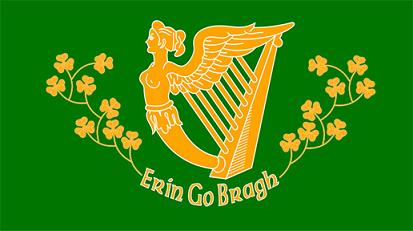