Flag of The Republic of Canada

The Republic of Canada was a short lived political establishment that was born out of The Upper Canadian Rebellion of 1837-1838. Led by Scottish expatriate William MacKenzie, he and his followers wished to separate themselves from British Colonial Rule. The Republic of Canada based it's ''government'' on Navy Island, a 45-square mile off-set of Grand Island, not far from The United States of America (Niagara Falls). Only 160 such Rebels claimed independence, with a high bounty being placed on MacKenzie's head by The British Government. With no real military force or means to recruit one, The Republic would dissolve itself in 1838. The Republic identified itself with only on Flag. A Bi-Color, it featured a Blue vertical Stripe over a White one. The Upper Blue contained (2) 5-point Stars. On the White, in Red lettering was the single word ''LIBERTY''. 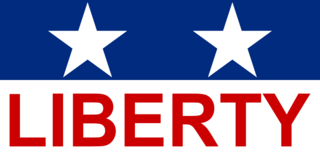