Flag of The Red Brigade

The ''Brigate Rosse'' or ''Red Brigade'' was a Left-Wing Italian Political Organization which existed in Italy from 1970 to 1988. They based their political doctrine of The Fascism of WWII Leader Benito Mussolini, but soon became Pro-Communist and Anarchist in philosophy. Their ultimate goal was to out NATO influence from Italy and establish a Communist type State. They planed to achieve these goals through mirder, kidnap and other Terrorist methods. Operating in clandestine ''Cells'', their true numbers will never been known. The Red Brigade was responsible for many massacres and related activities, causing them to be extremely feared by Authorities. The Organization was supported (money and weapons) by other well known Terrorist Organizations, such as The Palestine Liberation Army.

Internationally outlawed in 1988, most of their power was broken by arrests of all Party Leaders. However, it is speculated that many of The Brigade common ''soldiers'' escaped justice. The Flag used to identify The Red Brigade was a bright Red Field (indicative of the official Communist Color of Revolution). Centered in Red , was a Gold Star in a Circle (another Communist symbol). Posted over this Center imaged was the word ''BRIGATE ROSSE'' or ''Red Brigade''. 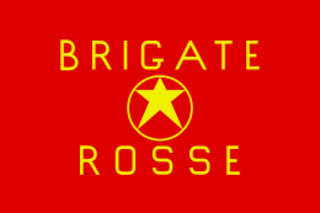