Flag of The Kingdom of Venice

In existence since the 6th Century, Venice was a major center for Trade and Commerce from the High Middle Ages until 1797. An “early” Republic in the Region, Venice (and it's shipping) – was identified by the red “Griffen” Flag. Roughly 6 feet long by 3 feet wide, the entirety of the field was red. Highly embroidered with white lace stitching, it featured 6 blue orbs representing the Six Ruling Families of Venice. The Griffen (affixed to the whole of the left portion of the flag), was white. Symbolizing strength, it supports a book which acclaims peace and prosperity (in reference to Venice Merchant abilities and values). Eventually overwhelmed by The Turks (and then The Austrians) – it lost it's symbol after 1797. A version of The Griffen was incorporated into Venice's current flag. 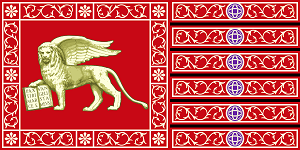