Flag of The Bophuthatswana Defense Forces

The Bophuthatswana Defense Force was an Apartheid Era (South Africa) Military Formation, which existed from 1977 until 1994. Consisting of a small Army, Air Force and Special Forces (Parachute) Battalions, originally The Force was envisioned for Presidential Ceremonial usage only. With the then common Government destablization in many of these ''Nations'' at the time, The Force was quickly corrupted into an ''Assassination Squad'' (at best). When Bophuthatswana collapsed and democratic voting commenced, The Nation and it's Force were purged and absorbed into The South African Republic. The Flag of The Force was a Tricolor of (3) vertical lines – Orange, Blue and Orange. Centered in the Blue Field was a circle with a Leopard's Head. A traditional Bantu Spear and War Hammer were placed to the rear. The Flag was used by all subsets of The Force. 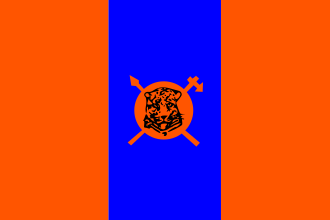