The Ship component known as a “Fighting Top” was a portion of a Mast’s Top Mast. Often confused with a Crow’s or Lookout Nest (Perch), The Fighting Top was a common feature with British, French and American Warships in the later 18th and 19th Centuries. They were almost exclusive to the larger Class of Man-of-War and The “74”-Class of Heavy Fighting Vessels. As with Ship designs of The Era, armament was regulated to below Deck emplacements. This meant only a “Line of Sight” for Gunners at both distance and range. This only allowed for moderate to severe damage from the Ship’s waterline to roughly 8-feet above Deck.  Although upper Shots could be achieved to an Enemy Canvas array and Mast, these were most often at distance and not “close quarters”.

One such innovation to this problem was the creation of a wooden, reinforced Platform called The Fighting Top. Placed on the upper most Top Mast, this Platform often varied in dimension – but were large enough to support it’s Mission. This was about 10-feet by 10-feet. The Platform was supported by under braces to the Mast. Access to and from The Fighting Top was by virtue of Jacob Ladders.

The placement of a “Fighting Rail” or wooden support was added to The Platform. In combat action, a Ship’s Marine Detachment (Riflemen) or Sailors with Rifles, could climb onto The Fighting Top and serve as both Sniper and Deck Support during close quarters or fighting when boarding an Enemy Vessel.

Later in the early to mid-19th Century, attempts at mounting Swivel Guns to the support Railing, was designed to fire down onto the Deck of an Enemy Ship. Although effective, excessive firings (even from the relatively low yield 1 to 3-Pound Shells), structural support issues developed. Although still used as a Snipers Perch, The Fighting Top would eventually evolve to a form of Observation Platform. Later, the name would be applied to the upper porting of a Fighting Ships Conning Tower. 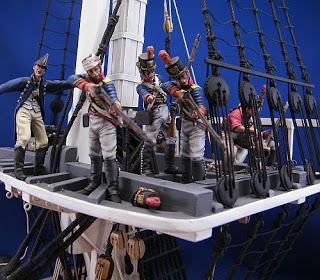