Located in Denmark, it is one of Europe's best surviving "Water Castles" (structures completely surrounded by or having a majority of their perimeter taken up by a large pond, lake or man-made moat). Although construction date vary, Egeskov Castle may have been started as early as the 13th Century. Many Danish nobles of the region constructed their private residences into fortifications due to the many civil wars and political unrest that The Protestant Reformation caused. The moat-pond surround the castle in 16 feet deep. The foundation of the structure is actually piles of stacked oak trees (it was said an entire forest was cut down to accomplish this). Hence the castle's name - Egeskov of "Oak Forest".

Originally, access could only be made to and from the castle via a drawbridge. The structure is actually two buildings connected by double thick walls. Two Round Towers were added to allow defenders (due to their placement) - to attack an approaching enemies flanks. "Murder Holes" and related openings were also incorporated into the structure. "Monk Stones" (unusual for construction), was also included into the design. The Defensive Towers were erected in panel pieces. Egeskov has Gables, reinforced windows - just about everything a fortification would need. There were even attempts to install primitive 14th Century plumbing (at one point). The castle is a host to several museums and is open to the public. 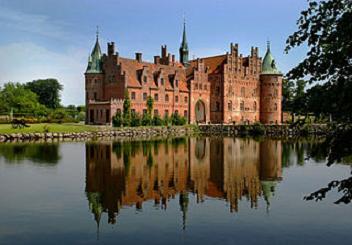