Inspired by The Boston ''Tea Party'' of 1773 (a Colonial American Protest against British taxation – or The Tea Act), Citizens of Edenton, South Carolina in 1774 too took an effort against The British with their own ''Tea Party'' (which has been largely forgotten to History). Unlike their Boston Patriots, The ''Party'' was organized and led by 50 South Carolina women.

Unlike Boston, no actual physical retribution against Ships carrying Tea into South Carolina Harbors were enacted. The Woman, all married or related to The South Carolina political aristocracy – signed their names to a Manifesto, decrying their concerns for ALL (ten) recent taxes against most Sundries coming to America.

Sent to Great Britain, warning that no British items imported into South Carolina would be purchased, The Manifesto was by and large – ridiculed in The English Press. 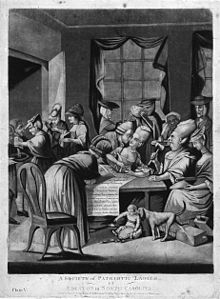