Although the initial idea of a "double barrel" cannon can be traced back to Italy in 1642, this Confederate cannon was in essence two cannon barrels conjoined by a common chamber. The theory of operation was that two cannon shot (2, 6, or 8 pound) - were connected by a chain. Loaded together, the cannon was fired. The shells were supposed to leave the barrels together (still chained). A natural spinning motion would occur, creating a giant spinning scythe-like shell (designed to cut in half anything in it's path). This rarely happened. Often, one shell would leave the barrel before the other - throwing off the intended "physics" of the weapon. Moreover, the shells rarely went in a straight or arched line. They would often "plow" into the ground, or in one case, (when testing the cannon on a barn), the shells killed a cow (200 feet away from the intended target).

The Double-Barrel Cannon saw service in The American Civil War, just once. In July of 1864, during The Atlanta Campaign - it was fired at Northern General William Sherman's advancing Union Army. There is no surviving record to tell if the shells killed anyone. The cannon was found rusting away in a swamp in Georgia in 1901. Restored, it sits in the Town Square at The City Hall of Athens, Georgia (US) - as a reminder of an interesting innovation during the war (if nothing else). 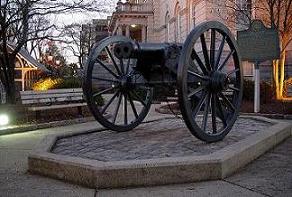