On of the oldest surviving structures of “Old San Francisco”, The Mission is better known as “Mission Delores”. Although dedicated to St. Francis of Assisi, the name was chanced to the nearby River Delores. Founded in 1776 by a Military Expedition led by Lt. Joaquin Moraga – the Mission was considered the farthest “North” of Sierra's “Alta California” Mission Forts. Built near a long vanished Lake, the Mission used this to establish a Mill (which aided in production of wheat and bread). The Mission Chapel is relatively unchanged since 1782.

At one time, over 5,000 local Native American converts called the Mission their home (and they are buried in the Mission Cemetery). During The Mexican “Confiscation” Period, Mission Delores suffered and was sold to private ownership. Most of the Priests Quarters and surrounding Exterior structures were demolished to make way for Gardens. By 1876, “Mansion House”was built and was a popular drinking and eating establishment in San Francisco. Wooden “clapboards” were placed on the exteriors of the old Mission at this time.

This however, possibly saved the original Mission Church. During the disaster which occurred with the Great 1906 Earthquake, most of San Francisco was destroyed (by quake and later fire). The Mission for some reason survived (possibly bracketed by the wooded structure). Renovation began in 1913 and was completed in 1926. Designated in 1952 as a “Minor Basilica” by The Catholic Church, The Mission Delores still functions as a Parish Church (with an excellent Museum as well). 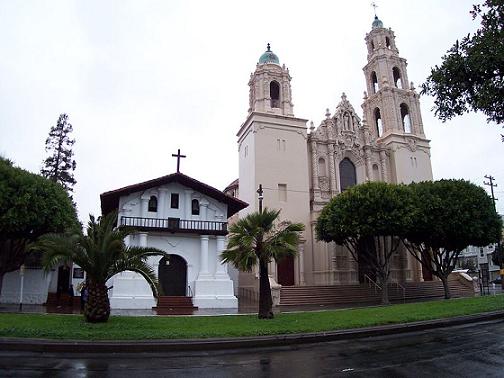