The De Renin Watchers were a series of fortified, defensive Watchtowers and Observation Posts, built throughout The Island of Malta and several other smaller Military Possessions of The (at first) Military Order of The Knights Hospitallers (St.John) – later The Knights of Malta. Beginning in 1658, a year long building campaign was undertaken by The Knights, then under Command of Grand Master Martin de Renin. He personally financed the construction of (13) stone Towers throughout Malta and Gozo. The design was taken from the pre-existing Moor/Turkish patterns of both The Sciuta and Lascaris, in use in the Region previously for very much the same purposes. Built from regional White Limestone and Shale, each of the Towers ranged in size and dimension – but typically featured a 30 to 60 feet Base/Foundation and were between 20 to 35 feet in height. Generally, A Tower was either 1 to 2 floors, on which a small “Garrison” (4 to 6 Men) could be stationed. The primary Mission of these Towers were to monitor and make alert should an Ottoman attack occur. The majority of constructed De Renin Towers were placed on the entirety of The Maltese Coast (Northward). The Towers could support small Artillery pieces if need be. In essence, The De Renin Tower was seen as a self-contained “Fort”. (9) De Renin Towers have survived today. Many were modified over the Centuries to reflect the Military needs of other Nations (which many being used by British Naval Forces as Observation Posts) up to the end of World War II. Some Towers have been acclimated into regular Civilian buildings in many Towns (especially Gozo). Other still retain their original Knights of Malta appearance. 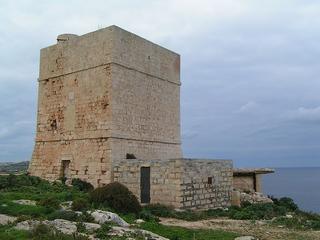