Developed during World War I, “Dazzle'' Camouflage was designed to confuse range-finding of an Enemy targeting an Asset, as opposed to “hiding” or “blending into” surroundings. These were seen as the basic component of Camouflaging. First devised for Warships, over 2,000 Vessels used The Dazzle Pattern in World War I. Ranging for Naval Artillery or Submarines was accomplished based on targeting an Enemy Ship via distance and speed of Target. “Dazzle” Camouflage used a series of Black and White vertical and horizontal lines painted throughout a Ship in contrasting patterns which created a difficulty in determining travel, distance and related. While effective to a point, this form of “Countershading” (another applied term) – was deemed problematic by some Navies. Both The British Royal and American Navies implemented the practice of Dazzle Camouflaging. Some examples were done on Aircraft and Artillery as well.

In World War II, the practice was re-visited. It was found that Dazzling was of moderate success against Japanese “Kamikazie” Fighters. However, it was found – that the addition of Light and Dark Blue lining aided the “effect” much better. Many US Warships in The Pacific attempted this for of Dazzling (while most Atlantic Fleets did not). Another form was “False Wave” Camouflage. This was a visual effect in which a false Wave Break was painted onto The Stern of a Ship which – when viewed from a distance gave a false direction and most importantly “draught” of a Ship. This was found somewhat effect as well, but was practiced too infrequently. With the advent of better range finding methods and equipment – as well as Radar and Sonar Systems fairly eliminated the need for Dazzling. However, it is still used for Building Camouflage occasionally. 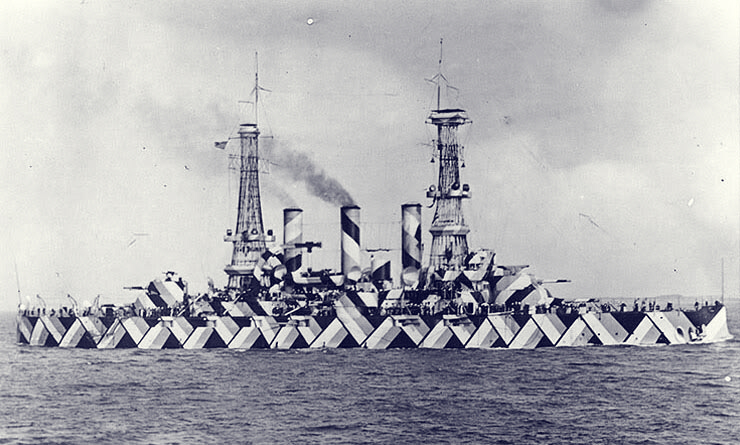