Considered by many to be one of The American West's most underrated Gunmen, Daniel Bogan was born in the State of Alabama in 1860. His Family moved to Texas (perhaps to avoid The Civil War). It is said that by the age of 7 years, Bogan was already learning His craft as Cowboy. With the death of His Father, and His Mother's failed two attempts at re-marriage – a change began in Dan and His 2 Brothers. Older, they would fall into a life of crime, with one being hung for Horse Thievery and the other sentenced to a lengthy Prison term for other criminal activities. Dan avoided an open life of crime, but had by all accounts a ''bad temper'' (and was prone to fist fights). Such a disagreement would send Bogan into a downward spiral of crime, shortly.

In Hamilton County, Bogan ran afoul of a beloved local Farmer – one night when He and a friend came out (drunk) from a Saloon. Perhaps the Farmer admonished Bogan for being a drunk, this is not well known. The Farmer was said to had raised His Horse whip to Bogan. Bogan returned ''the favor'' by pulling out His gun. Many say that Bogan did not mean to shoot The Farmer – that His weapon misfired. Regardless, The Farmer was shot dead.

Arrested, tried and found not guilty (self defense), Bogan left Texas, working as a Cattle Drover in and around Kansas. He ran afoul of famed Western Sheriff Pat Garrett (over a Cattle Theft dispute), but was able to again ''beat the charge''. Bogan made His way to Wyoming, working for various Cattle Farms. He became very quick and skilled with a gun by this time. Several ''bad shootings'' in disputes, led Bogan to become wanted. It was said He killed a Constable and Texas Ranger at one point. Bogan had a $25,000 (USD) Bounty placed on His head ''Dead or Alive''.

Getting into a major fight in a Wyoming Saloon, which netted several dead at Bogan's hands (of which Bogan was too wounded by shotgun blast), He would be arrested, tried and sentenced to hang. However, Bogan had many friends. An organized escape (as is His Legend) – yielded Bogan having escaped ''the Noose'' – and into Western History. Many claim He would end up in Mexico (even California, for a time). Nothing has ever been truly proved – including when Dan Bogan died – and where. 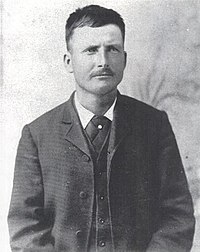