With the establishment of The 2nd Virginia Convention in 1775, the cause of Freedom had been laid. Virginia had determined to set the stage for open rebellion against Great Britain. The Colonies would eventually come together, each sending representatives to assemble, and form a Colonial Congress. Their goal was a peaceful withdrawal from English colonialism. But most well knew, that was a pipedream. Britain would rather fight that capitulate. The Colonies had no Army. They did have however a form of defense. This defense was The Militia System. Each Colony had them dotting thru the landscape. Made up of citizens with mostly no experience in the ''Martial Arts'', they trained to come together at a ''moment's warning''. Assembling with rifle and shot, these ''Minutemen'' were soon to form the corps. of the later Continental Army.

Virginia first gathered some 50 such Militia from around the Colony. Training began (quietly) to form a more cohesive military force to be used should Great Britain deploy more forces. Stacks of arms and powder were gathered and stored Of all the Militia in Virginia, it was Culpeper County that supplied the most dedicated and best trained force. The Culpeper Minutemen (as they were called), trained constantly. They fielded spies to monitor British movements (by land and sea). They quietly began to store munitions and prepare plans to seize British Cannon and other material, ''when the time came''.

The Culpeper Minutemen embraced much of the extreme radicalism of Colonial American Independence. The Banner they adopted was a White Field, emblazoned with ''patriotic phrases'' such as ''Death To Tyrants'' and ''Don't Tread on Me''. They were also among the first Militia to adopt ''Liberty or Death'' as a Battle Cry. Further, The Culpeper Men wore distinctive ''uniforms''. They adopted Green and Brown Hunting Shirts, often with the same phrasing painted on their shirts as their Battle Flags. The Culpeper Men's first Mission was to harass British Ships attempting to being Cannon into Virginia Ports. The Minutemen ''snipers'' stationed in Hampton spent several days ''picking off'' errant Seamen on the decks of passing Warships. Disbanded when The Continental Army was formed due to The Declaration of Independence, many of the Culpeper Companies went into formal military service.

Much later in American History, The Culpeper Minutemen would again form. This time, in 1860 – with Virginia well on the road to dissolving The Union with The United States (ushering in The Civil War), The Minutemen enlisted several hundred volunteers. With Virginia leaving The Union in 1861, The Minutemen were mustered into service as The 13th Virginia Infantry. By World War I, the latest Culpeper Minutemen would join The US Army 116th Infantry Regiment and fight in many key battles, including The Meuse-Argonne Offensive. The current incarnation is The Virginia State Defense Force, The United States only still active State Militia (separate from The National Guard and Reserve Force). 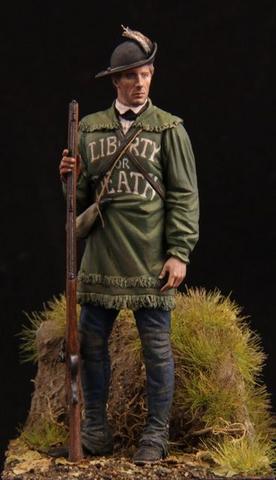