The somewhat little known and short lived American Confederate Army of New Mexico was formed to fight in The American Civil of 1861-1865. Commanded by famed former US Army Officer Henry Sibley (creator of the previously discussed and innovative Sibley Military Tent), the primary mission of The Army was to support Mexico Territory. The Territory, while officially Union – harbored Southern sympathy to such a degree that it's Territorial Government wished to leave The Federal Government. They supported and help raise The Army of Mexico.

The other goal of The Army was to stop any Federal advances to support land operations towards both California and Colorado (both of which were Union supporters and both of which mined extraordinary amounts of Gold and Silver. Both commodities were badly needed by The South. The Army of New Mexico was at it's largest – 2,215 Officers and Men assigned to (3) Infantry Regiments, (1) Battalion of Mounted Rifles and (3) Artillery Batteries.

After several moderate engagements, The Army of New Mexico was pushed into The Battle of Glorieta Pass (1862). Sometimes known as The ''Gettysburg of The West'', the fight pitted The Army against 1,300 Federal Soldiers (mostly Cavalry). A Confederate loss, over 200 of The Army of Mexico died in battle or from wounds. Consequently, all Rebel supplies and munitions were captured by The Federals and destroyed. Neither New Mexico Territory nor The Confederacy could afford to resupply. The Army was split up and redeployed to other Eastern Commands, with all hopes of capturing California and Colorado lost.

The Army Flag also was a recreation of prior history. A Red Field in it's entirety, a single White 5-pointed Star was placed center. The same flag was used by The Republic of Texas when it declared it's independence from Mexico in 1836. The single Star motif was a popular, patriotic image within Texas. 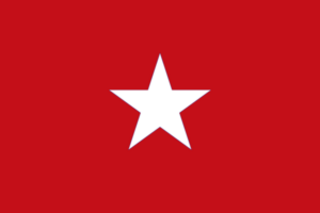