The ''Communist International'' was a Political Concept of the former Soviet Union (Russia). Founded in 1919 by Vladimir Lenin, His primary goal was to create an organization which would advance Communism thru ''whatever means'' necessary. This was to include covert and overt means of overthrowing non-Communist Governments, use of military resources and propaganda. The Concept and establishment of The Soviet Organization targeted the many ''Working Class'' populations of heavily industrialized Nations, who felt overlooked by their Governments. Such sentiment had been quite common in France, England, Germany and to a small extent – The United States. In many Nations, The ''Communist International'' Theory was seen as a ''criminal venture'' meant to overthrow the established Government, with many riots being a result of harsh enforcement against such. Still active by World War II, it was Joseph Stalin (Leader of The Soviet Union), who ''suspended'' both the Concept and Organization, due to the possibility of ''offending'' Russian Allies (who were Democratic Capitalists). A different version of the Concept would develop in the 1950s and advance until the collapse of The Soviet Union in the 1990s. 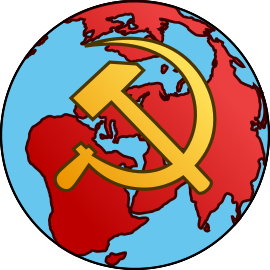