The Collier and it's related Classes of Ships, were designed for The 18th and 19th Century Coal Trade. Most Coal producing Countries used some form of the vessels. Overland transport of the ore was expensive and time consuming. Any available waterways (rivers, inlets and even Coastal waterways) could be used more effectively, and could transport more of the ore faster. Colliers were flat (or semi-flat), low draught ships. Normally twin Masted, a typical vessel was around 77 feet long, 25 feet high and crewed 25 men. Very little space was afforded for crew quarters and above deck structures. The main priority was to get as much coal aboard as possible. Ranging from 250 displaced tons, some Colliers were assigned as Coal Tenders to restock ships when The Age of Steam came into being. Widely used in England and Wales, Colliers would continue their work well into the 20th Century, with both steam and sail, still in use. 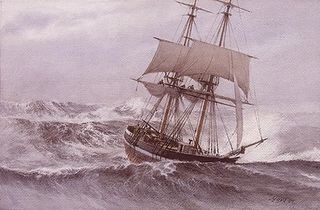