While it's origins are more known with stories of espionage and covert missions – linked most often with spies and ''spycraft'', the term ''Cloak and Dagger'' has several historical links. The first is one of literary origins, seen in the 1840s, and born of European ''Swashbuckling'' drama. Given the trend to make Piracy a ''romantic'' World of handsome Corsairs and beautiful Maidens, the term was developed. It was first used (or attributed to) American Poet Henry Wadsworth Longfellow. The second, and perhaps more viable definition to Cloak and Dagger developed from a combination of French and Italian Swordsmanship or Combat training. The use of The Straight Sword gave way to the more elegant Rapier. So too vanished the shorter, secondary Arming Sword (used in conjunction with The Straight Sword) – in favor of The Dagger.

As a ''Gentleman'' dueling was want to wear the best in fashion, one of these components was The Cloak. In various Swordsmanship training Schools of the 16th Century, fighters were taught to conceal their drawn dagger with their Cloak draped over their hand. The sharpness of the blade was of no obstacle to heavy cloth. Additionally, the use of The Cloak as a ''flourish weapon'' or distraction device, gave the fighter the ability to swish and move a Cloak rapidly enough to cause an Opponent to concentrate more of the concealed weapon and less on The Sword. 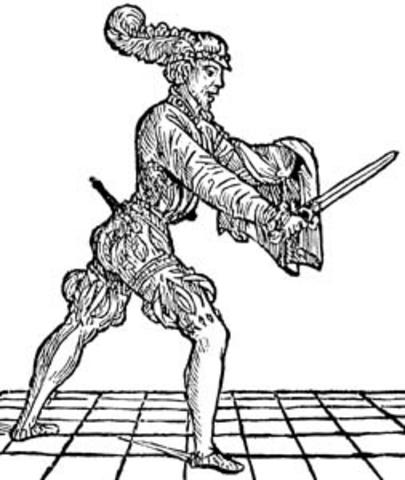