These “Superships” were first developed around the 9th Century A.D. (and in used up to the 13th Century). Part of the efforts of The Song Dynasty, they are also known as “Zheng Ships” (after the Chinese General who was tasked with their protection). Many of these ships were 400 feet long and could easily displace some 2,000 tons. Mostly powered by (5) 60 to 70 foot Main Masts, they also featured up to 8 decks!. A large 6 level Casemate Building was constructed at the rear of the Main Deck. This was used for Commanders, food preparation and Guard and Defensive personnel Quarters). The remainder of the massive ship was used to transport tons upon tons of Royal treasure. It has been said that The Zheng Ships could crew up to 1,600 men. They carried up to 100 cannons of different poundage. It has been estimated that Zheng's “Fleet” may have comprised of 44 of these “Monster Ships”. With new Dynasties come new Emperors. Many later Rulers saw no need to waste the expense of The Treasure Ship's cost for upkeep. Most simply rotted away in Harbors. 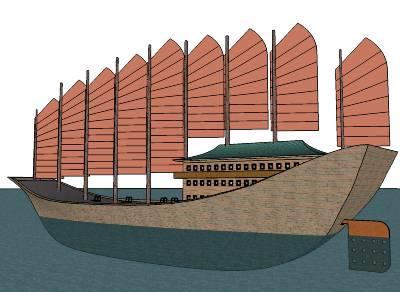