''Slips'' is the term given to the form of Ancient Chinese recording Medium, used for writing information of note. These were small and long pieces of cut bamboo or wood, either flattened on one end and polished. Onto this slender reed was imprinted in line form, Chinese language characters. These were either ink painted or burned via pre-made plates. Slip Printing was a very expensive method for recording information and was cost prohibitive to all by The Emperor and certain Religious Temples (Monks) – who maintain ''Royal Libraries''. The earliest examples date to 1,250 BC.

Joined (connected) by thin wires attached via small drilled holes on the ends, The Slips were ''folded'' or stacked in plates. These plates could be stored into boxes which were later stored in Libraries. When Silk and Paper was deemed more practical 11th Century AD, Slip Printing naturally ceased. However, many were still maintained as permanent Records. 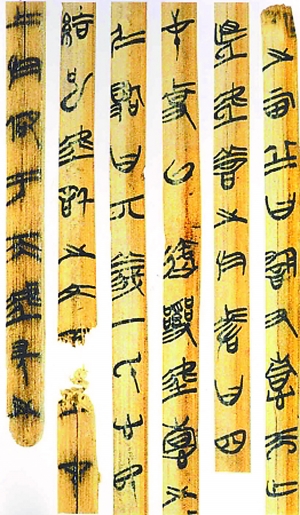