The Chetnik were a Serbian Nationalist Movement that aligned itself with The Yugoslavian Royalists, between 1941 and 1946. They were World War II, Anti-Axis supporters and fostered a political aim of establishing a free Serbian Nation. Akin to The Free French Resistance, The Chetniks were known for using a method of collaboration with The Nazi and Italian Authorities within occupied Serbia, as a means of not only maintaining their ''status quo'' but using a ''false flag'' mentality to use terror tactics against German occupiers. They were supported by a like Yugoslavian Government (also in exile). They are considered by some Historian as an early example of ''Terrorist Group'' activity who had an ''ultimate'' agenda which was the genocide of Croatian and Muslims within their perceived National boundaries.

The Chectnik ''Battle Flag'' was a Black Field in it's entirety. Centered in White was a Skull and Crossbone motif. An Upper and Lower Banneroll over this image read ''For King and Fatherland, Freedom or Death''. 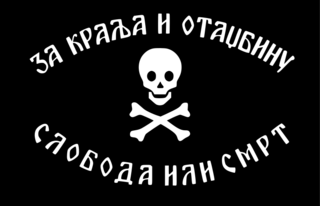