Chepstow Castle is located in Chepstow, Monmouthshire, Wales. Constructed on the overlooking hills and cliffs of The Wye River, Chepstow Castle is considered one of the oldest Post-Roman stone fortifications still standing in Britain. Begun in 1067, it was one of the "reinforcement castles" built for "The Welsh Marches" (which was a system defining the boarders between England and Wales). The surrounding cliffs on which Chepstow was built, afforded it an almost impenetrable status. An encircling double-thick perimeter defensive wall was constructed to run along both cliff and landside. As many as 7 defensive Towers were built (mostly facing landward).

A "Great Tower" was constructed in the interior (similar to a German Bregfried Tower). A central Keep was also constructed as well as other interior structures. The Upper Baily is separated from The Inner Bailey by a double thick defensive interior wall (used as a fallback position to defend the Keep). By 1245, Chepstow was essentially complete. Edward I visited Chepstow in 1284 during his "triumphal" Coronation Tour of Wales. As the wars between England and Wales began to decline, so did Chepstow's need to be maintained as a stronghold. The last English "attack" was on 1403, when an English force debated attacking the castle. Garrisoned with "60 skilled Archers", Chepstow was avoided. After Chepstow entered into the English Aristocracy, many renovations were attempted and done.

During The English Civil War, Chepstow was "the front line" for regional Royalists defending it from Parliamentarian forces. Besieged in both 1645 and again in 1648, it finally fell. Those Royalists who did not surrender, were slaughtered. The Rebels used Chepstow as a garrison for their artillery. After his capture, King Charles I was even imprisoned there briefly. Parliamentary forces disbanded and abandoned Chepstow in 1682. Although not slighted, the local population stripped much of Chepstow for it's stone. Falling into ruin, it remained that way until 1913, when Chepstow was purchased by a private owner. Many years have gone into renovations to restore the castle into it's current "semi-ruined" state.

Certain areas of the castle and grounds can be visited. 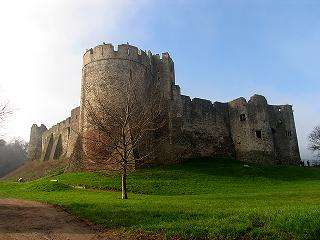