Located in Loire, France – Langaeis Castle was built in 992 A.D. Under commission of Count Blois. At odds with Odo I, his Forces besieged the castle almost immediately after construction. Not falling to the enemy, a strengthened Keep was constructed. The defensive Perimeter walls were 6 feet think in some places. The Keep/Manor (42 feet tall) - was reinforced to resist siege engines (featuring 15 foot thick walls). In 1016, Odo again attempted to wrest control of Langaeis. This time, he was successful and took it. The castle eventually fell under Plantagenent control – and was renovated and enlarged by King Richard I (England). It fell yet again under French control until it was finally destroyed during The Hundred Years War. Rebuilt in 1456 for the marriage of King Philippe II, it remained in it's condition until full restoration started in 1886. The surviving structures are still able to be visited. 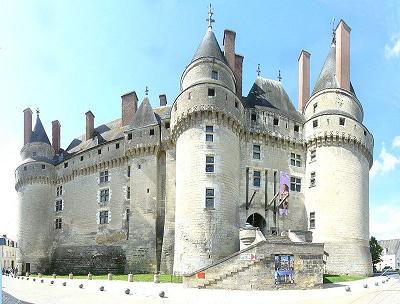