The initial Keep of de Dinan was constructed in 1382. Translated into English as "The Keep of Duchess Anne", it stands 111 feet tall. Construction was started by John de Monfort IV, upon his exile from England (due to his initiation of The Breton War of Succession). The Keep is formed as part of a combination of 2 circular Defensive Towers, a Moat and an attached Drawbridge. From the Keep-Drawbridge combination, the builders spread outward (in an irregular shape), some 8,500 feet of attached defensive Perimeter walls  which make up The Town of Dinan, in Brittany, France (which still stand today).

The Keep or "Donjon" is composed of 6 levels, all connected by a series of spiral staircases. De Dinan is a fine example of military engineering of the 14th Century. 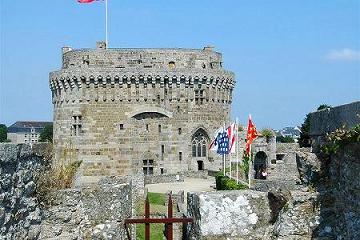