Castle Stalker is located on an outcropping on Loch Laich, - in Port Appin, Argyll, Scotland. Classed as an “Island Castle”, it is completely surrounded by impassable water when The Loch us at high tide. Built in 1320, it was originally a wooden fortification, later conveyed to stone (1322), Castle Stalker was the seat of power to The Clan MacDougall. These were Highland Nobles, who were against The Bruces during The Scottish Civil Wars. As a result, The Clan MacDougall abandoned Castle Stalker. In 1388, The Stewarts took control until the 18th Century. It sat in ruins until purchased in 1908. It has been moderately restored to it’s 15th Century appearance. Castle Stalker was never besieged or Slighted. It is a Central Keep (Tower House), which is 4-Stories tall. The majority of “Castle Life ” there included Living Quarters, Kitchens and Armory. The walks are made of regional stone, roughly 6-feet thick. Outer buildings such as Stables and other ancillary structures may also have existed, as evidenced by existing foundations. At some point, despite it’s natural water defenses, a small Perimeter Wall may have existed in the 15th Century. This may have been 6-feet tall and 3-feet thick. It has long since vanished. 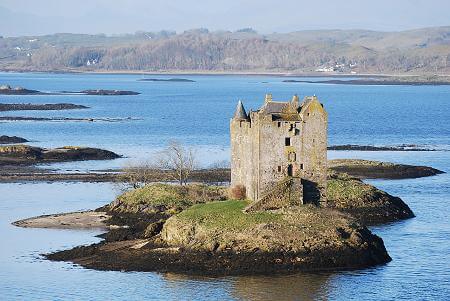