Considered the oldest masonry fortress in The United States, San Marcos is located in St. Augustine, Florida. Began in 1672 by Spain (to protect her holdings in Florida from not only English incursions but Piracy), it was completed in 1695. Built in the Star Fort configuration, The Castillo de San Marco (The Castle of St. Mark), encompasses some 320 acres. Constructed out of regional stone and sand/shell mortar, the fortress features simple Horn Work extensions to her 40 foot thick perimeter defense walls. Cannon emplacements and Parapet walkways complete the enclosure. With a small inner courtyard, most of the fortress' living quarters and related buildings were build into the fortress walls or underground. Open to the North (facing The Atlantic Ocean), a wet Moat ditch was designed to assist in protection from attacks coming from the Southern landward portion of the fortress. San Marcos could garrison up to 800 soldiers. Besieged in 1702 by British Forces, some 1,500 local Spanish towns people were given safety inside the fort. Although a Spanish Fleet arrived to break the siege, a vengeful English burnt the Town of St. Augustine. In 1738, San Marcos was renovated and it's walls increased to 35 feet. In 1763, as a result of The Treaty of Paris (ending The Seven Years War) – Spain ceded Florida (and the fortress) over to The English. Renamed “St. Marks”, The English went about renovating her to their needs. As England became the dominate power in America, St. Marks was left largely in disrepair. With the advent of The American Revolutionary War of 1775, St. Marks was quickly put into service as an port against Charleston, South Carolina (only 2 days away by sail). In 1783, after The War, Florida was again (and the fort) – given back to Spanish control (The Second Spanish Period). Although a Spanish protectorate, most of Spain's citizens had left Florida (leaving mostly English settlers). Soon border issues developed between Spain and the new United States. Eventually, in 1821, Florida was ceded to the United States (as was San Marcos). The United States took over occupation of San Marcos (and changed it's name to “Fort Marion” – after Revolutionary War hero Francis Marion). Heavily renovated (to include a prison), Ft. Marion also was heavily stocked with “Ball Furnaces” (outdoor ovens used to heat cannonballs – which would in turn be fired at wooden enemy ships). Ft. Marion was an important part (Army Headquarters) of The Seminole Indian Wars of Florida (mid-1830s). With the start of The American Civil War (1861-65), Confederate Forces took Ft. Marion and garrisoned it. They maintained it until St. Augustine fell to Union Forces in 1862 (Second US Period). Garrisoned, Ft. Marion served as a military prison for the remainder of the War. During The Indian War Period, the Fortress held several famous Indian War Chiefs in custody. After The Spanish-American War of the late 1890s, St. Augustine was not garrisoned and was left to nature. In 1924, The State of Florida stepped in to declare the Fort a National Monument and renovated her back to her original pre-English condition. The Fort also went back to her Spanish name of “San Marcos”. San Marcos also has the claim to history as having served under “5 Nations” in her history. San Marcos is still a popular tourist destination for visitors from all over The World. 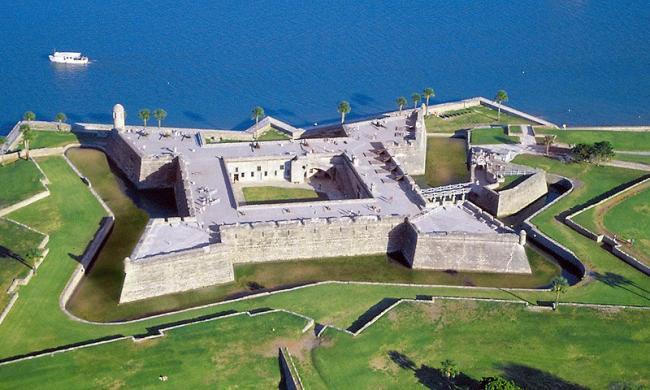