Located in Rome off The Tiber River, “The Castle of St. Angelo was built of regional stone in 135 A.D. - as the Tomb for the Emperor Hadrian. It was used for subsequent other Emperors until the 5th Century, when it became part of the City of Rome's defense system (based upon it's reinforced circular Tower construction). It was “added” by way of a “vision” had by then Pope Gregory The Great. In 590 A.D.- Rome was ravaged by a plague. The Pope had a vision of The Archangel Michael sheathing his Sword above The Castel. This was interpreted as the “ending of the disease”. A marble statue of The Archangel was place in The Castel. When Holy Roman Emperor Charles V attacked and sacked Rome in 1527, The Castel became the virtual “prison” for Pope Clement VIII. Due to this, the interior portions of the structure were renovated into Papal apartments. At one point much of the Vatican's treasures were stored there. The Castel in later centuries went back to it's defensive role (mostly as munitions storage. The Castel suffered minor damage during World War II. The Castel has points were it's defensive walls are 8 to 12-feet thick. 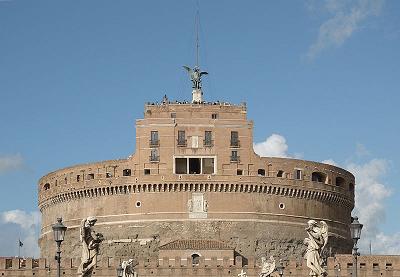