Located in Columbus, Ohio (US), Camp Chase was built as a staging area and encampment for Union soldiers. A type of “basic training” facility, with the influx of captured Confederate enemy soldiers, a section was quickly established as a Containment Facility. In it's early days, most “Rebels” were paroled (or rather took an Oath and signed documents of non-combatant status). This obviously failed. Therefore, Camp Chase became a more permanent structure for the holding of captured Confederates until the wars end in 1865. Over 9,500 Confederates were contained within it's walls. To be sure, Camp Chase was a far “better place” than it's infamous “Cousins” - namely Andersonville and Libby Prison.

Soldiers were given proper clothing, food and and access to medical needs. Although some documented cases of “mistreatment” by Union Guards were known, it was nothing like Southern Camps. Closed in 1865, most of the Facility was dismantled. A Memorial was erected in the 1890s. A Confederate Cemetery remains (which is the resting place for the 2,200 Rebels who died while in captivity). Camp Chase also featured a famous “legend”, involving the so called “Lady In Gray”. A spectral visage of a young woman (all in gray), has been seen (time to time) – wandering the Confederate Cemetery. She is claimed to be “searching for the remains of her Lover” who died and is buried somewhere on the grounds. 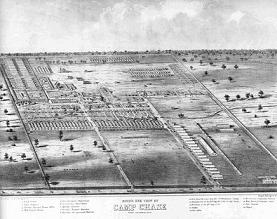