The term ‘’Burschenschaft’’ was applied to an ideological concept seen in Germany around the late 1840s. The concept grew out of the many Colleges and Universities in that Country (as well as spreading to other Germanic Nations). The ‘’free thinking’’ Students saw that Germany (as a Nation), was susceptible to political graft and was beginning to adopt the early beliefs (by some), of Socialism and Communism (propagated by such ‘’radical thinkers’’ as Karl Marx and Fredrich Engels). Students formed Societies on Campus called The ‘’Burschenshaft’’ -which espoused three critical ideas. These were ‘’Honor, Freedom and Fatherland’’. The Movement would spread throughout the populace and help spur on The Unification of German Independent States (split into such by Napoleon of France). The Movement would flourish until the establishment of The German Empire of 1871. Later, when National Socialism developed and took power, the initial ‘’three concepts’’ were likewise applied to Germans (long weary from their devastating loss and surrender after World War I. 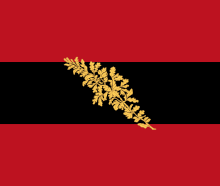