While the term “Bunker” can closely traced back to 18th Century Scotland, the design and use of Bunkers within a Military form are actually quite ancient. In construction, Bunkers are underground fortifications (either simple or elaborate), made to protect soldiers from artillery (and later) aerial bombardment. In many cases, Bunkers have simple above ground structures – similar to Casements. From these fortifications, Observers could monitor Enemy Troop movement and direct artillery fire. Often, medium to heavy artillery were also placed inside these Casements (becoming artillery emplacements). In World War I, Germans used the term ‘’Dug Outs” to refer to Bunkers. They were best seen in the elaborate Trench defensive/offensive systems of that conflict. Normally, 1,000 meters or so, Bunker entrances were positioned leading to moderately sized underground structures. These  structures could provide . Some of the more elaborate of which were France’s ‘’Maginot Line’’ and Germany’s ‘’Atlantic Wall’’ Systems. In both cases, these defensive Bunker systems were not a continuous “line’’, but a series of extended fortifications. As with most type of this Class, the invention of Aircraft and of course Bombers, made them obsolete.

Although no longer a staple of defensive warfare, nonetheless – Bunker systems are still used in varying types by some Countries, despite advances in military technology. Even in a “Nuclear Age’’, some Bunker systems still exist and were designed to withstand Atomic Attack (strike and prolonged radiation). A classic example of this form is The US Air Force’s Cheyenne Mountain Facility in The US State of Colorado. First opened in 1961 during some of the most turbulent times in The ‘’Cold War’’, The Complex was designed to withstand a direct hit from a Nuclear Device (more or less). Located under 2,000 feet of natural Granite (rock), Cheyenne Mountain is further reinforced with hundred of feet of concrete and steel (many feet thick). 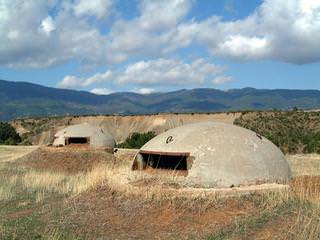