Born in 1855 as Lawrence Buchanen English, His older Brothers gave Him the nickname of ''Buck'' (by which He was called from 5 years of age forward). He was raised in Northern California, and spent His life in The American State. But Buck, while coming from a hard working Farm Family, got involved in His Family feud with another Family – The Durbans. Fighting over property rights, by the time Buck was 15, all of His Brothers had been killed in the Feud. Buck would avenge them, by shooting and killing several Durban Family members. This caused Buck to ''go on the lamb'' from The Law. He turned to Stagecoach and Bank Robbery as His vocation in life. It was a good life too, for Buck and His small group of criminal associates were perhaps even more prolific than the equally infamous ''Black Bart'' (aka Charles Bowes), who also ''worked'' Northern California at the time.

Buck was noted for His overbearing and ''devil may care'' attitude. So ''cocky'' in fact, Buck would go into Town after Town, bragging of His exploits and of Him having ''no fear'' of The Law. He would continue for nearly 20 years this way – amazingly avoiding capture by any Town Sheriff or Marshal. This streak of ''luck'' (as it were) ended in Middletown, California when Buck challenged a former Army officer to a Gunfight. Although the Veteran did not die of His wounds, He was crippled for life. A Posse of Vigilantes almost ''strung up'' Buck, but they decided to deliver Him to something He hated even worse...He was turned over to The Law.

Sent to San Quentin Prison until His release in 1885 (many of His past crimes could not be proved) – His first acts were to commit several robberies. Buck would spend the next 10 years pretty much the same....robbing Stagecoaches and bragging about His lack of fear for The Law. A Posse again tracked Him down, only this time He was severely wounded. He went ''home again'' to San Quentin. Released in 1915, Buck ''settled'' down briefly, before His death of natural causes 6 months after His release. 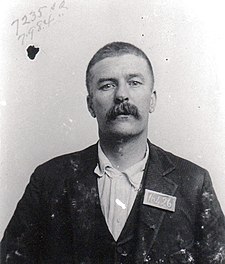