The Royal Aircraft Factory SE5A Fighter was a single-seat, Bi-plane, put into service in 1917. Seen as a replacement for the vaunted Sopwith Fighter, The SE5A was 20 feet long with a 26 foot wingspan. The Fighter was capable of an operational ceiling of 19,500 feet. Somewhat "fast" at 120 mph, The SE5A used a combination of Vickers and Lewis .303 Machine Guns. It was also capable of carrying 200 pounds of explosives. Deployed to The Western Front in 1917, The SE5A suffered from somewhat sluggish controls (and could not match The Sopwith's air combat, plane to plane records). However, it had superior "climb and dive" abilities and could withstand heavy battle damage (and maintain flight). Over 5,000 were produced and we're popular among American Fighter Squadrons. 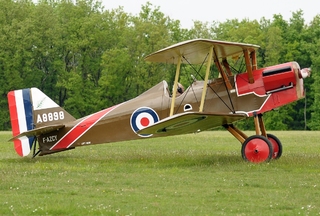