Developed in 1936 and deployed in 1938, The Vickers ''Wellington'' was the principle Heavy Bomber of The British Royal Air Force. Unique in it's geodetic Airframe, The Wellington's unique Airfame decreased air drag (being used in Airship design as well). The Bomber also used variable pitch propellers (which increased shaft rotation and made Engine operation smoother and more reliable). Able to withstand moderate Flak hits, they had a remarkable survival rate. Over 40 variants were developed for Army and Navy usage. Nearly 12,000 Vicker-Wellington's were produced from 1938 to 1945.

The Wellington was 65-feet in length with a Wingspan of 90-feet. Crewed by (6), it used Twin Radial Engines. Able to achieve an airspeed of 235-mph, The Bomber could range over 2,000-miles. They were able to reach an operational ceiling of 18,000-feet. Wellington's were armed with (6) .303 Cal. Machine Guns, positioned throughout The Fuselage. They could carry 4,500-pounds of Ordnance. The Wellington was replaced in dominance with The Avro Lancaster Heavy Bomber – but never truly replaced. It was part of The Royal Air Force Inventory until 1955. 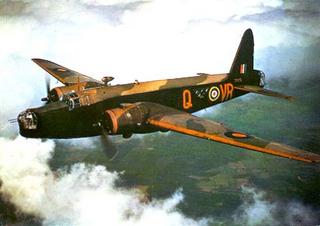