The Dolphin entered service late in the War (1918). It saw much of it's service at The Western Front. Crewing a single Pilot, the plane was 22 feet long with a (multi) wingspan of 32 feet. It had an operational ceiling of 20,000 feet. Armed with twin 7.7mm Vickers Machine Guns, The Dolphin also carried twin 25-pound high explosive bombs (bottom racked and electrically operated). The name “Dolphin” was for it's nose (or front) resemblance with the sea mammal. The plane suffered from engine stalling problems at or close to ceiling operations, and was not carried forward in Britain's inventory after the War. Over 2,000 were produced. 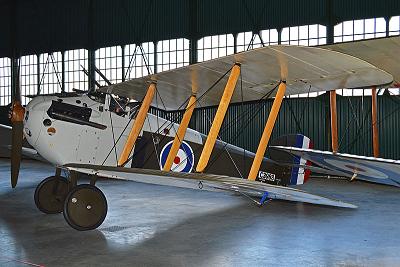