Invented in 1718 by James Puckle, The Puckle Gun was simply a large flintlock revolver. Extremely innovative (and far ahead of it's time), the weapon was mounted on a tripod carriage system (a type which would not be in ready use for several hundred years). It operated on flintlock technology and was fitted with a multi-chambered cylinder for it's shells. It was originally intended for use by The Royal Navy to repel boarders. The single-barrel was 3 feet long and had a bore diameter of 1.25 inches. The pre-loaded cylinder of 10 shots was capable of firing multiple .58 caliber rounds. It was manually operated. The shooter would turn a hand crank which would position the barrel. Once locked, the operator would pull the trigger to deploy the round.

The process was repeated 10-times. Of note, two versions were made. One fired normal rounded bullets and another fired an innovative "square bullet" intended to cause massive damage to Muslim enemies. There is no proof that The Puckle Gun was used in actual combat. It was stated that the gun's cyclic rate of fire of 63 bullets in 7 minutes. Unfortunately, the smoothbore created problems with flight trajectory in bullet flight. A positive for the weapon was it's quick change chamber (an early forerunner of the modern speedloader). Although several examples have survived into the modern ages, most seen in Museums are reproductions based on Puckle's design. 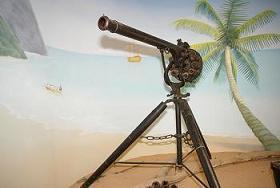