As was tradition, The British Army in the 1730s with regards to it's Colony in America, did not station Regular Army Troops in The Colonies. Any needs for Military services were met by raising such Independent Companies. They were not part of the greater British Army. They were given Regimental Colors and Numerical Identifiers. The Oglethorpe Regiment was known officially as The 42nd Regiment of Foot until 1748.

The Regiment was also the first Colonial American Regiment which saw service outside of The Colonies, being dispatched to The Caribbean to fight in The War of Jenkin's Ear (1739-1742). They also besieged Castillo de San Marcos in St. Augustine, Spanish Florida – and several French positions still in existence on The Georgia Coast.

After The War, The Regiment was disbanded – but many ex-soldiers would go one to join The British Independent Company (formed in South Carolina (1763), to fight in The French and Indian Wars (Seven Years War in Europe).

The Regiment wore the traditional Scarlet Tunic Frock of The British Army, with Green Facing and trim to denote it was an American Colonial Force. They fought under The British ''Red Ensign'', which was a Field of Red in entirety, with The Union Jack (Pre-1801 Version) placed in the Upper Left Canton. They were not issued Regimental Colors. 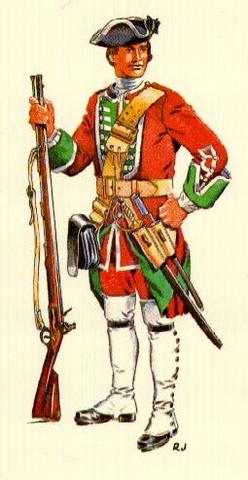