An attempt to provide an even more practical self-protection shelter during The Biltz of England during World War II, The Morrison Shelter was seen as an upgrade to the previously discussed Anderson Shelter. The Morrison was even more practical, especially when only (1) person was involved. Also seen in the late 1930s and early 1940s – The Morrison answered the question of how to protect a Citizen who did not live in a residence that had no basement and due to overall location – could not reach the larger ''Public'' Underground Subway Train Tunnels. The Morrison Shelter fixed this problem.

Upon first view, The Morrison gave strong resemblance to The Mortsafe (those protective steel grills placed over graves to deter grave robbers). In truth, they served the same purpose. The Morrison was a large, reinforced steel barred encasement which was anchored (bolted) over the bed or sleeping area of the apartment dweller. Climbing inside, a person could safely sleep without fear – even if a direct bomb or rocket hit their dwelling. Although one might debate this, great effort in testing was applied to the survival of The Morrison in a Bomb hit. It had been determined (many times through examining the way a bomb and rocket hit and destroyed a building) – that the majority of demolition damage to a structure from munitions caused only one side to collapse downward. The resulting debris (although weighing hundreds of pounds and close to a ton of rock), would not penetrate the sturdy cage of The Morrison.

The Morrison Personal Shelter was 6-feet long by 5-feet wide and 3-feet in height. It consisted of 359 parts and came with 3 simple tools for personal construction. Over 500,000 Units were produced. Of 135 V-Rocket attacks, 120 Units and their Owners survived direct hits. It was also determined that the majority of fatalities with Morrison Shelters were caused by Owners improperly placing them in required ''strong zones'' within their Residences. 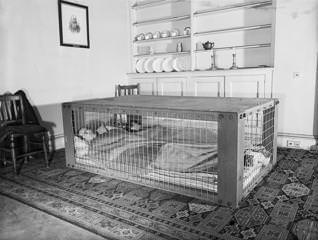