A Scottish Regiment raised in 1689, it was recruited in response to The Jacobite Rebellion. Legend states that 800 recruits were signed up within 2 hours of posting muster. The Regiment was tested in battle at Killiecrankie, where they supposedly fired a volley into the advancing Jacobite Army, killing their Commander (and winning the Battle). The Unit was deployed to Egypt and served in The Anglo-Afghan War in the late 1870s. They wore the standard British Scarlet uniform with their distinctive Scottish-Plaid trousers (popular in many Scottish Regiments). Kilts were used for Ceremonial wear. Using traditional infantry weapons, they distinguished themselves in many future wars (particularly both World Wars). In 1952, they were sent by England and The U.N. to Korea. They also served in Northern Ireland during "The Troubles". They are one of the few English Units not to be merged, but did have their name changed to The Royal Regiment of Scotland (currently). 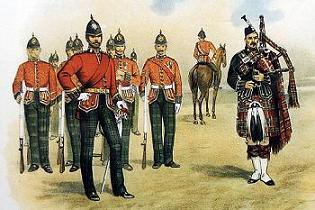