Seen in the 19th  Century, The Howdah Pistol was best described a s a Shotgun Pistol. 2-barrels set side by side and chambered to fire the British .577 caliber shell. It had a short range of 50 yards. Made popular by British Colonials in India, the term “Howdah” comes from the name of the wicker basket platform affixed to the back of Hunting Elephants. Therefore, the Howdah Gun was designed to inflict stopping power to larger game. A rear-break, breech loading weapon, The Howdah had a heavy trigger pull. Weighing at 3-pounds, they saw use against locals during the many rebellions in India (and were used by some Officers during The Anglo-Zulu Wars). The Howdah Pistol was another “casualty” of the advent of the more popular Webley Revolver. 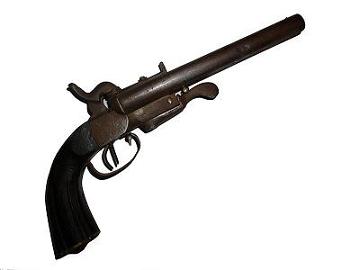