Sometimes referred to as "Tiffy", The Hawker Typhoon was envisioned as a tactical Dive Bomber for The British Royal Air Force in World War II. Designed in 1940, they weren't deployed until 1942. The Typhoon was noted for good flying abilities, but suffered from stability issues when operating at it's maximum airspeed of 400 mph. Featuring an engine capable of 2,250HP - The Typhoon was better suited to low-level operations (12,000 feet and lower). Using an attack style similar to Germany's "Stuka", The Typhoon was soon earmarked as a potential "Tank Killer".

The Typhoon was 31-feet long with a wingspan of 41-feet. A single-seater, she was equipped with (4) 20mm Cannon. She carried (8) RP-3 Rockets underwing (or could be configured to deploy 1,000-pounds of regular munitions. Deployed primarily to North Africa, several Squadrons of Typhoons provided constant harassment to Germany's "Afrika Corps". Over 3,000 Models were built during The War. 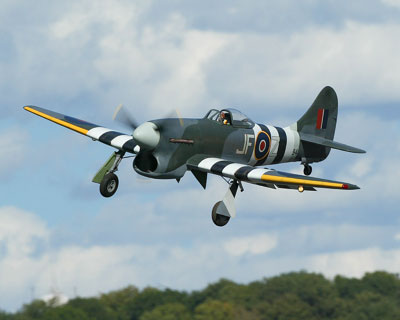