First flown in 1937, The Hawker Hurricane was at one time considered the most advanced Fighter on Earth. Also being the first British mono-winged Fighter (transitioned from WW I bi-planes), it was a highly effective aircraft. At 31 feet in length with a 40 foot wingspan, The Hurricane could achieve 324 mph at maximum airspeed. The Hurricane had an operational ceiling of 10,900 feet. Capable of light Bombing missions, it's underwing racks could carry up to 300 pounds of munitions. It was also equipped with a hearty array of no less than 8 Browning .303 wing mounted Machine Guns (4 per wing).
Although somewhat eclipsed by The Spitfire Fighter in 1941, The Hurricane was a staple in the defense of England during The Battle of Britain. It saw extensive service in The Mediterranean Region, as well as North Africa. The Hurricane would later be deployed to The Far East against The Japanese Empire. Production was ceased in 1944. However, The Hurricane Fighter would continue as a frontline Fighter until The War's end in 1945. 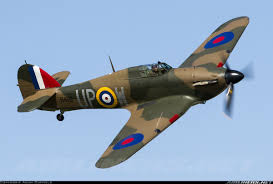