The iconic Fairbairn-Sykes Fighting Knife was developed in 1938 by two British Constables, seconded to The Shanghai Police. They adapted a knife for close quarters fighting, based on lessons learned from Knife fighting criminals.
Adopted by The British Military in 1941, the typical blade was 12-inches long and double tinsel strength metal. Forged thin, it was a double-edged blade. The handle was a "swirled", solid metal construct. A large Pommel was attached as well. The Fairbairn-Sykes was often seen as a "Stilletto" Knife (but is actually classed as a "Dagger"). The Fairbairn-Sykes (designated The F-Stuka Knife), was designed to be able to pierce up to 3-inches of cloth and still be able to pinch through the chest (and easily though the ribcage of an enemy). It was for this reason The F-S was issued to Specialist Operations soldiers such as British Commandos. Soon the blade was seen in  use by Allied Special Operations Groups.
Although various blade sizes were made (3, 6 and 8-inch varieties), the standard 12-inches wad the most popular. A special scabbard wad manufactured that allowed for concealment and dual hand draw (left or right).  The Fairbairn-Sykes gave birth to a plethora of fighting knives throughout the World. 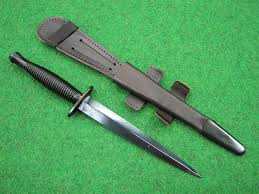