The “Corvus”-Class of British Warships, were of The “Corvette” design and were a popular type of fast attack and highly deployable Warship in the mid to late 19th Century . The Class  (of which there were 9), were constructed between 1878 and 1881. By The Victorian Era, England had increased it’s Colonial holdings throughout the World two-fold. The Royal Navy needed a Class of Ship which could serve to protect The Empire’s concerns. The larger Ships of The Line were expensive to maintain. The “Corvus”-Class fit the need.

Incorporating both the dying “Age of Sail” with the rapidly advancing “Age of Steam and Iron”, The “Corvus”-Class wad among the last to integrate both technologies. Although Steam powered, they still utilized The Barque Sail Pattern  (often the most massive of Sail designs). Their wooden Hulls incorporated Iron over Wooden frames (1.5-inches of Armor plate). Partial Steel Upper Deck Gun protection (Barbettes), were common place. The “Comus”-Class typically displaced close to 2,500-tons and were roughly 200-feet long. They had a 45-foot Beam and sat 10-feet in the water. Their steam Engines could produce over 2,500-HP. They could muster 25-mph. Armament was heavy, and The Class carried both heavy and light Cannon, including the Nordenfelt Automatic Gun. They also carried early experimental Models of Torpedo explosive devices. Although The manufacture of The Class ended in 1881, many were still used in The Royal Navy until 1900. 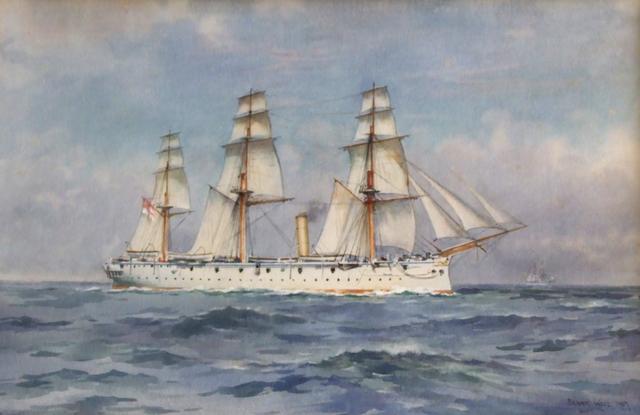